"Runs" provides a list of active and completed pipeline runs. You can get parameters and logs of specific run and stop run here.

Runs are organized in a table which is the same for both tabs:

Note: also you can view information about runs via CLI. See here.

This tab displays a list of all pipelines that are currently running.

Tooltips contain a state name in bold (e.g. Queued) and a short description of the state and info on the next stage.

Cluster is a collection of instances which are connected so that they can be used together on a task.
If launched run uses a cluster or an auto-scaled cluster (see sections here), it has a certain designation:

By default, only master-run is displaying at the table. To view nested runs (child-runs) click the Expand control in front of the muster-run ID:

So, you can view an information about each child-run and its state, also you can stop specific nested run without stopping a parent run. You can open Run logs page (see below) for any of the cluster runs by click it or LOG button next to run ID.

Note: you can't pause cluster runs even with On-demand price type.
Note: stopping a parent run will stop execution of all nested runs too.

For runs with the auto-scaled cluster not all of the child-runs appear in the list immediately after parent run was launched, "scale-up" runs will appear only of necessity.

According to the run states and system-level settings, additional metrics (labels) could be displayed for active runs:

Values of these thresholds and time period are specified by admins via system-level settings (see here for more details and an example of using - here).

This tab displays a list of all pipelines runs that are already finished.

If completed run used a cluster or an auto-scaled cluster (see sections here), it has a certain designation. Displaying of such runs on the COMPLETED RUNS tab is similar to the active cluster runs. You can view an information about each child-run and its state, also you can rerun specific nested run without a parent run. You can open Run logs page (see below) for any of the cluster runs by click it or LOG button next to run ID:

It consists of several sections:

This section displays general information about a run:

Nested runs list is displaying only for master runs. It is the list with short informations about cluster child-runs: 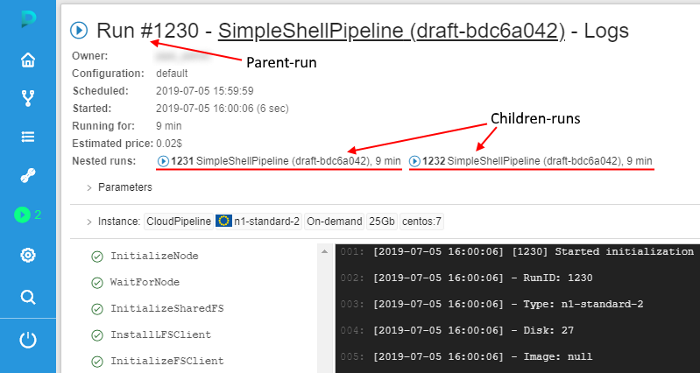 Similar as a parent-run state, states for nested runs are automatically updated without page refreshing. To open any child-run log page - click its name in the list.

Here user can create/view/edit/remove schedule rules for the specific active launched run. That set rules allow to pause/resume the run automatically in the scheduled day and time.

The Maintenance control is available only for active "On-demand" non-cluster runs.

To edit an existing schedule for the active launched run click the Configure button.
The popup with created rules will appear:

You can, for example, remove an existing rule and add new ones:

Changes will be displayed at the Run logs page and will be applied to the active run:

In general, this behavior is configured identically to the Maintenance control at the Launch page - for more details see 6.2. Launch a pipeline (item 5).

The "Instance" section lists calculation node and execution environment details that were assigned to the run when it was launched.
Note: node IP is presented as a hyperlink. Clicking it will navigate to the node details, where technical information and resources utilization is available - for more details see here.
Note: Docker image name link leads to a specific Tool's detail page (see an example).

Note: if specific run CPU/Memory/Disk consumption is lower or higher specified in the configurations values, the IDLE or PRESSURE labels will be displayed respectively:

The parameters that were assigned to the run when it was launched are contained in this section.
Note: parameters with types input/output/common/path are presented as hyperlinks, and will navigate to appropriate location in a Data Storage hierarchy.

Note: if a user specifies system environment variables in parameter (e.g. RUN_ID), GUI will substitute these variables with their values automatically in the "Run information" page.

Here you can find a list of tasks of pipeline that are being executed or already finished. Clicking a task and its console output will be loaded in the right panel.

Here you can view console output from a whole pipeline or a selected task. It also shows a run failure cause if a run failed.

Also, during a pipeline run an extended node-level logging is maintained:

Users with the ROLE_ADMIN role can find the corresponding node logs (e.g. by the hostname or ip that are attached to the run information) in that storage by the path logs/nodes/{hostname}:

Automatically rerun if a spot instance is terminated

In certain cases - Cloud Provider may terminate a node, that is used to run a job or an interactive tool. It may be in cases:

These cases aren't a Cloud Platform bug. In these cases: